Research shows that while U.S. consumers love candy, they hate shopping the candy aisle at the local grocery store. According to an article in Shopper Marketing Magazine, 76% of shoppers surveyed are not happy with the clutter on traditional grocery store shelf fixtures. Candy that is displayed on ordinary store racks or store display shelving ideas is confusing. Most shoppers walk away frustrated with no candy in their cart or avoid the aisle all together. 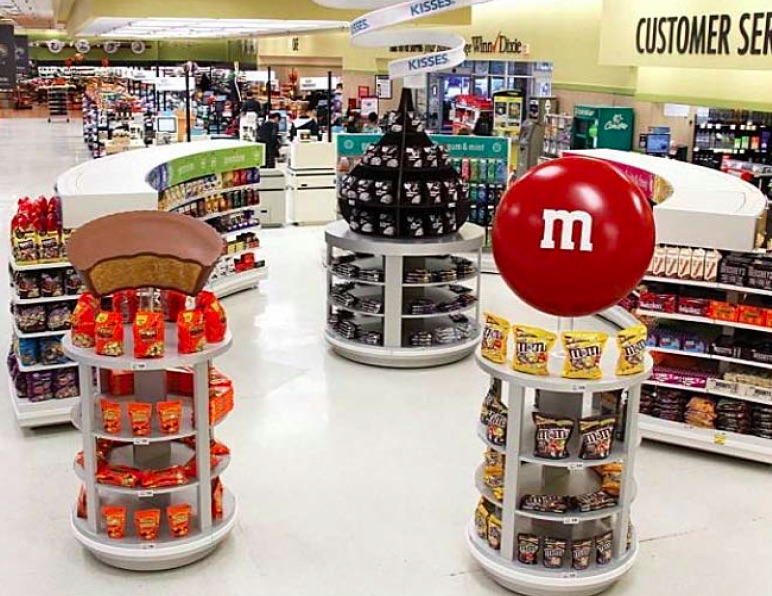 Shoppers often steer clear from the more traditional grocery store fixtures that display candy. The average shopper can only process four feet of visual merchandising at a time. Most grocery store aisles are anywhere from 50 to 100 feet long. At first sight, this looks like an endless sea of product. It is way too much to process and often leads to a quick retreat.

Creating A Store Within A Store

The Hershey Company has begun testing a new store within a store business model or SWAS concept for short. These types of store interior design ideas are also called shop in shops or pop up shops. The goal was to make shopping for candy more fun and productive. Hershey believed that if they were able to accomplish that goal, candy sales would increase by at least 25%. The return on investment would be roughly 2 years for the cost of the new candy merchandiser displays.

There were five things that Hershey needed to do to make the SWAS program a success. They were:

The retail candy display pop up shop concept brings the confection department out of the usual grocery store aisle layout. This new visual merchandising technique was to bring it to a section of the retail store design layout that is hard to miss. This space on the store floor plan is often near the entrance or front-end checkouts, counters or cash wraps. Often the shop in shop candy shelves will be installed into an area where shrinking categories such as greeting card displays, seasonal or magazine racks used to live. Replacing losing categories with a section of high impact, custom candy fixtures is a win win.

The location is only the first step to the success of the program. Clutter is the most commonly used word shoppers used to describe the traditional, grocery store candy displays. Therefore, the candy needed a fresh approach and new retail merchandising techniques. Hershey accomplished this by separating the product not only by brand but by usage occasion. For example, sorting product by categories such as movie, grab n’ go and candy dish helped shoppers find what they were looking for much easier. They also used eye catching, custom printed graphics to help shoppers easily navigate the new space. These custom printed signs also added to the overall look and feel of the new merchandising displays. They also replaced the grocery store signage that did not look any different from the rest of the grocery signs and décor throughout the store.

Developing the Fixtures and Displays

Hershey understood that if the SWAS concept was going to work, it would need to become a destination within the store that shoppers would not want to miss. The most important part of the program was the candy icons that would be the highlight of the in store display. That is where DGS retail came into the picture. 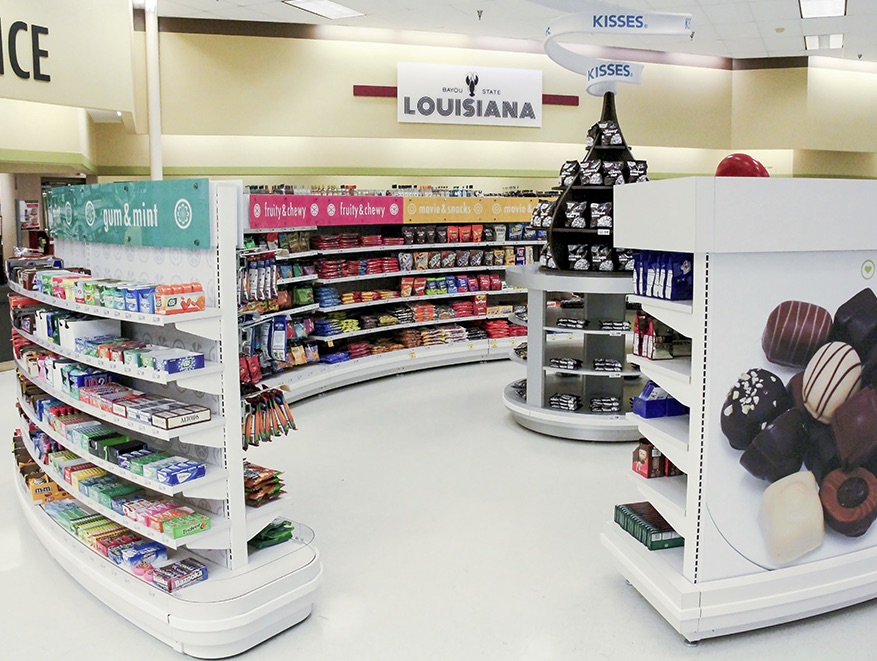 Hershey chose DGS to partner with in the design, manufacturing and installation of the branded display fixtures. These custom candy merchandisers featured larger than life replicas of some of the most iconic candy pieces in the world. 3D replicas of the Reese’s Peanut Butter Cup, Hershey’s Kiss and M&M Candy (Mar’s brand) all had to be developed. Using custom made molds and hand painting, exact scaled replicas were made that were so life like, it was hard not to try and take a bite.

These “candy toppers” were attached to round, rolling display tables called Pods. The Pods would display only product that directly related to the candy icon on top of them. The customer’s reaction to these unique candy fixtures was even better than expected. As a result, it is fairly common to see shoppers posing for selfies or snapping photos of their kids in front of the displays. After all, who can resist a twelve foot tall Hershey’s Kiss?

Hershey’s best guess was that the SWAS program would increase confection sales by at least 25%. They estimated that based on the cost of all of the displays, custom built store fixtures and installation the program would pay for itself in 2 years. Rick Price, senior manager of merchandising for Hershey, told Shopper Marketing Magazine that “results have surpassed initial forecasts”. He also stated that a positive return can be achieved in less than 2 years for stores that sell $150,000 of candy every year.

The two grocery chains that first tested this new concept were Winn Dixie (Southeastern Grocers) and Cub Foods (Supervalu Inc.). After one year since the initial concepts were installed, both retailers reported sustained growth on both category sales and basket size. This is proving that the new experience is building shopper loyalty. The concept not only connects with Millennials but with Baby Boomers as well. Candy is fun no matter what your age is and these iconic brands relate with almost everyone.

Hershey researched shoppers and found that most of them were frustrated with the typical candy aisle. Customers found them to be too cluttered and too difficult to find what they wanted. This was resulting in shoppers leaving the store without making any candy purchases at all even though most consumers have a real love for candy.

With the help of DGS Retail, Hershey came up with a plan to take candy out of the aisle and create a new shopping destination. They developed a store within a store that would create a fun, unique shopping experience. The displays were moved from the aisle to a more favorable location within the store. The concept combined displays with large candy icons, better organized merchandising and eye catching printed graphics. The result was a sustained increase in candy sales by at more than the anticipated 25% while also building shopper loyalty with a more satisfying, shopping experience. 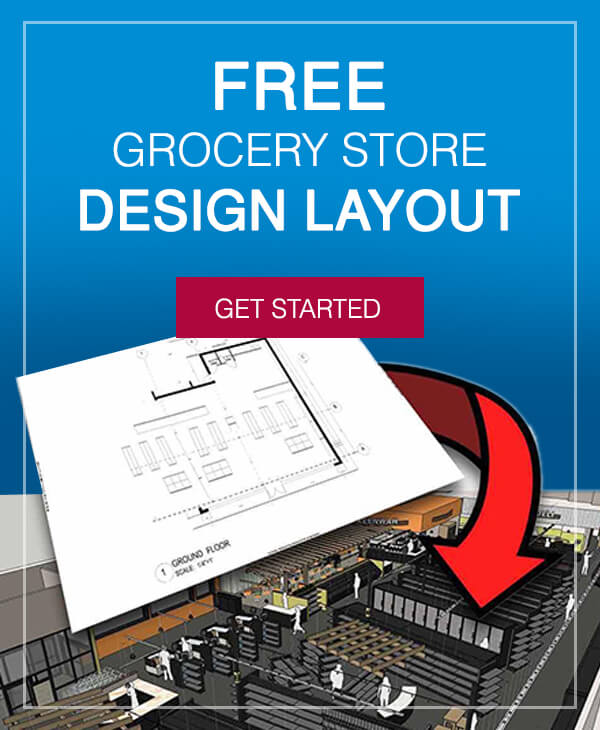