Based in Cabazon, California,  Hadley Fruit Orchards is a landmark roadside specialty food retailer. They sell nuts, dried fruit, bread, dates, and more. The store has operated since the 1930s, originally in Pasadena before setting up shop in Cabazon. Located just off Interstate 10, the store was owned by the Hadley family before being sold to the Morongo Band of Mission Indians in July 1999. The store remains a one-stop shop for local families and travelers to this day.

In 2016, the Morongo Band joined up with major architecture firm  DLR Group and general contractor Moorefield Construction to build a new 12,500-square-foot store in Cabazon, visible from I-10 and next to the Morongo Casino, Resort and Spa. It would be based on the original location of Hadley Fruit Orchards. One of the key issues to deal with was the store's overall layout and interior design, especially as they sought to expand their offerings to include liquor, health foods, vitamins, and fresh baked goods. 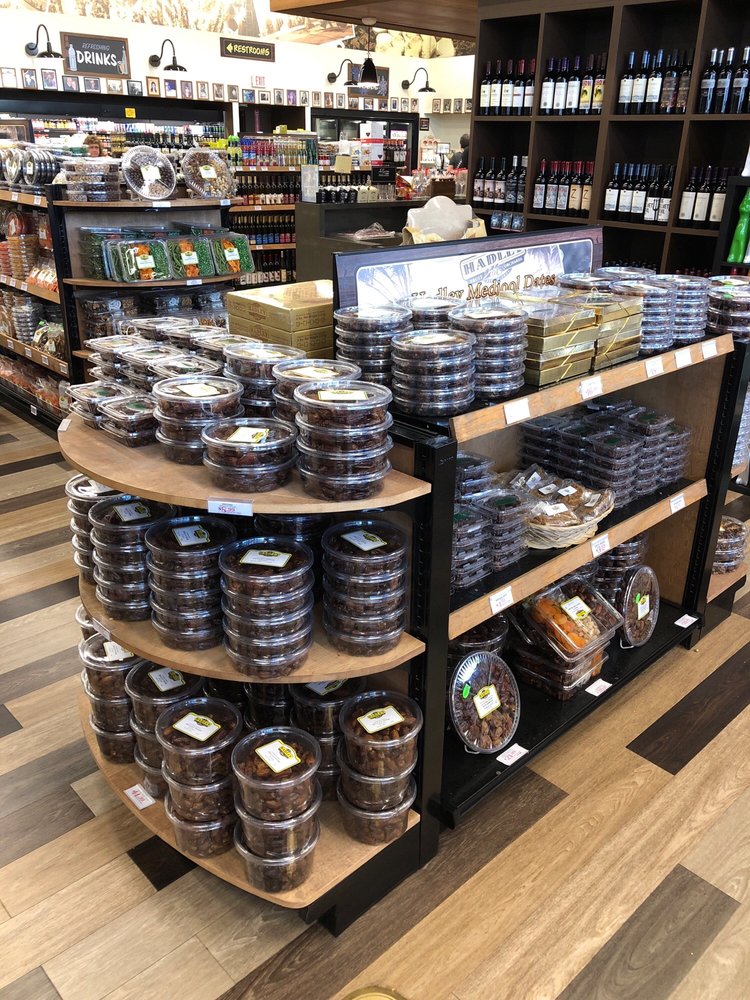 DLR Group contacted DGS Retail during the design and construction process about helping out on the store layout. DLR saw  our line of bakery and bread shelving alongside our wooden orchard bins as store fixtures that matched up well with their design ideas for the store. This design language respected some of the handmade wood store fixturing used in the original store. DLR used a design that also took advantage of Hadley's long history through the use of historic black and white photos of the original store and the local area in the same time period. These elements were used in the perimeter wall store decor and signage. This was augmented with black and white blueprint or chalkboard-style images of machinery near a center-store wine tasting bar and the use of vintage-grade light fixtures throughout the design.

History played a role, as many credit store founder Paul Hadley as the inventor of trail mix snacks. Key to the overall design was the use of wood and reclaimed wood to create an authentic outdoorsy feel to the store. Our wood shelving was critical, for it allowed for a continuation of this look through the entire store, all the while maintaining distinct sections of the store through the use of subtle differences in fixture use and placement. To tie everything together, we used black gondola shelving units with  mahogany wood stained accents.

For our layout, we utilized  rounded end caps in the center to give a more informal feel to the store. They served as great places for a variety of items, including bulk foods. We also utilized wall gondola units along the perimeter of the store, which worked ideally to merchandise souvenirs, gifts, and vitamins.

Orchard Bins for A Change of Pace 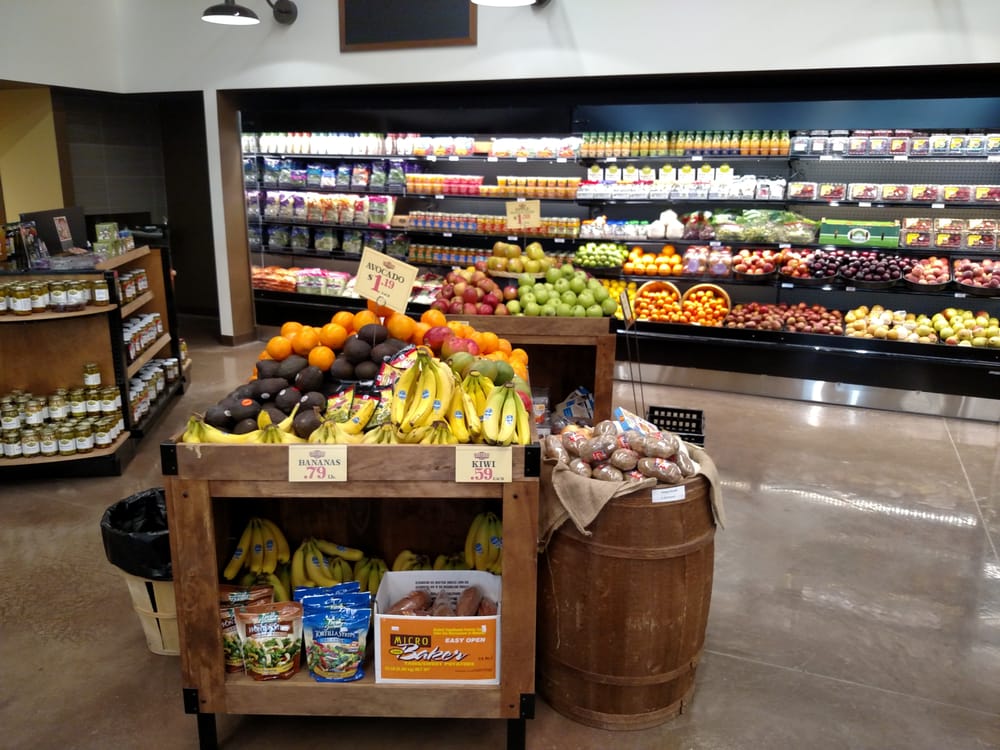 Because DLR Group served as the store designer, our primary role was to create a layout that suited the needs of both the store design and the customer. We received architectural drawings and renderings with general fixture locations, and rendered a layout of fixtures for them to use. It was then reviewed by DLR Group for standard issues such as ADA compliance and aisle visibility.

After the review was complete, we made recommendations based on our prior experience in store design and layout. In the case of Hadley Fruit Orchards,  we suggested wood orchard bins and barrels as a form of break from the gondola aisles and feature areas. They were to be used as stack-out cases and function as a feature space for high-margin products. Within the aisles themselves, we recommended wooden dump bins to attach to the shelves. They functioned well as wooden crate retail displays, and they also helped keep aisles visually stimulating by breaking up the shopper’s line of site while maintaining the store's overall theme.

The layout process for such a large store took 9 weeks in total. For 6 of those weeks, we worked closely with DLR Group to ensure we were meeting both their design vision and budget. The final order and delivery of our fixtures took 3 weeks. The new Hadley Fruit Orchard opened on time and under budget.

Hadley Fruit Orchards showcases the potential of wood shelving and localized store decor in a grocery store layout. We can offer similar high-quality results from your supermarket as well.  Just check out our services today. 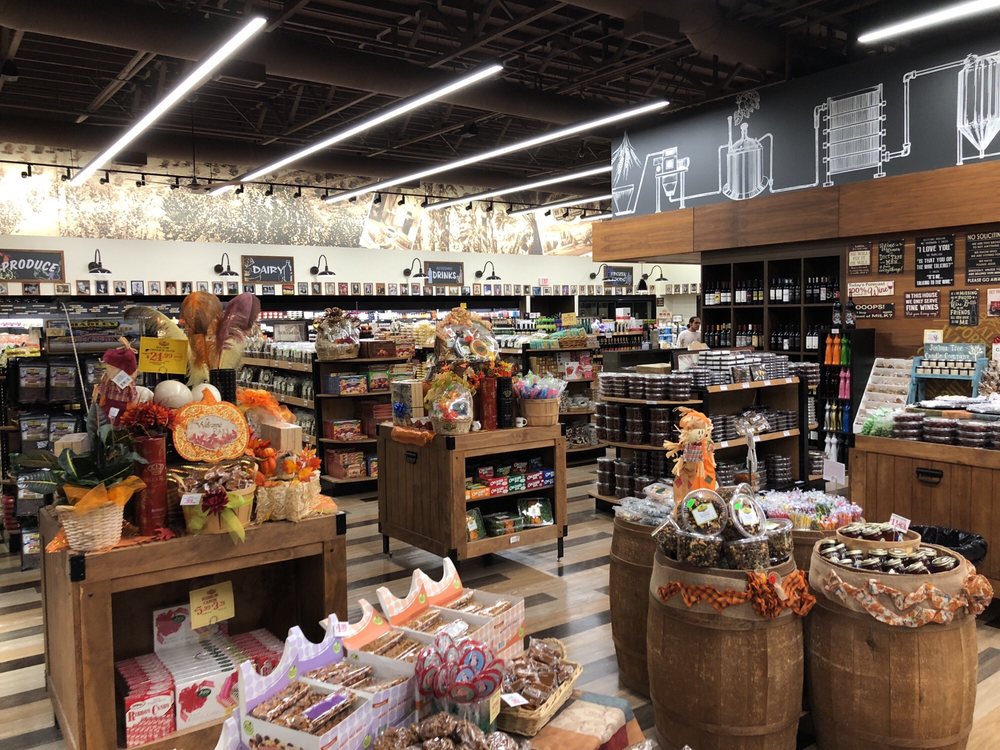 Products Featured in this Case Study 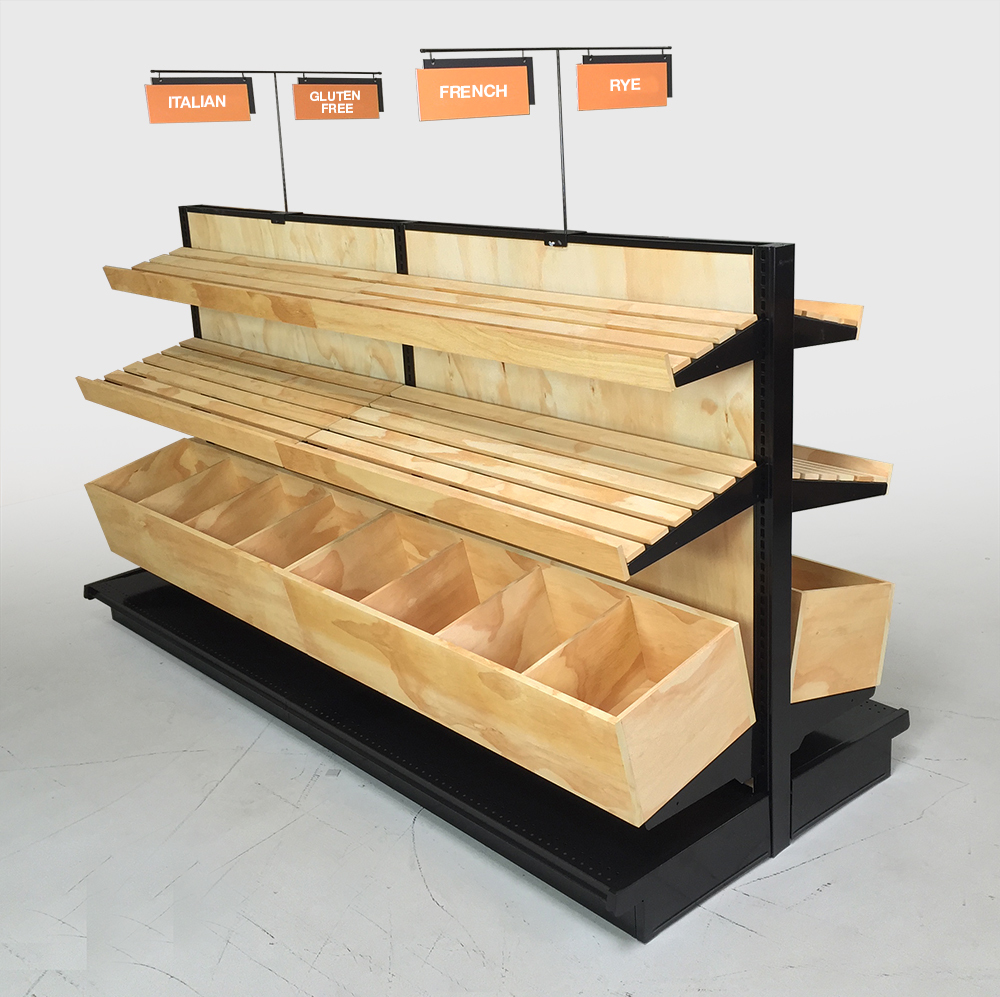 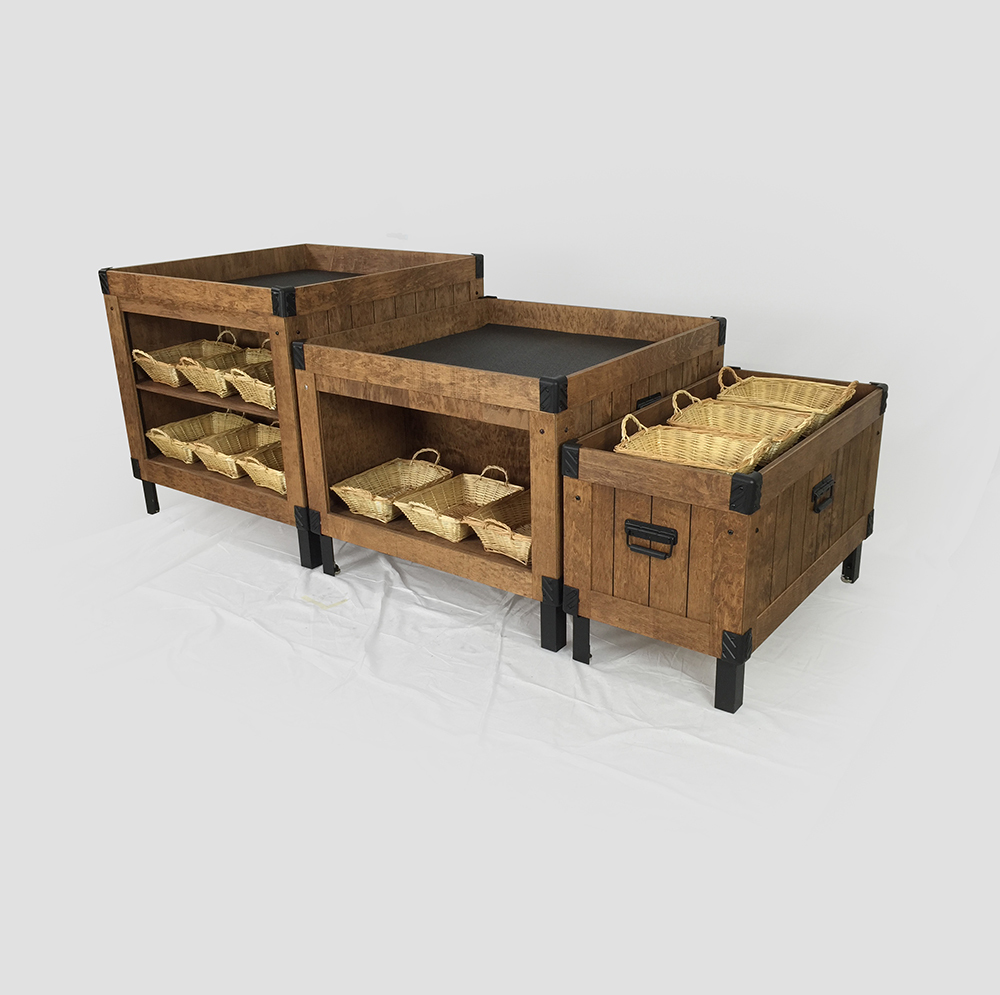 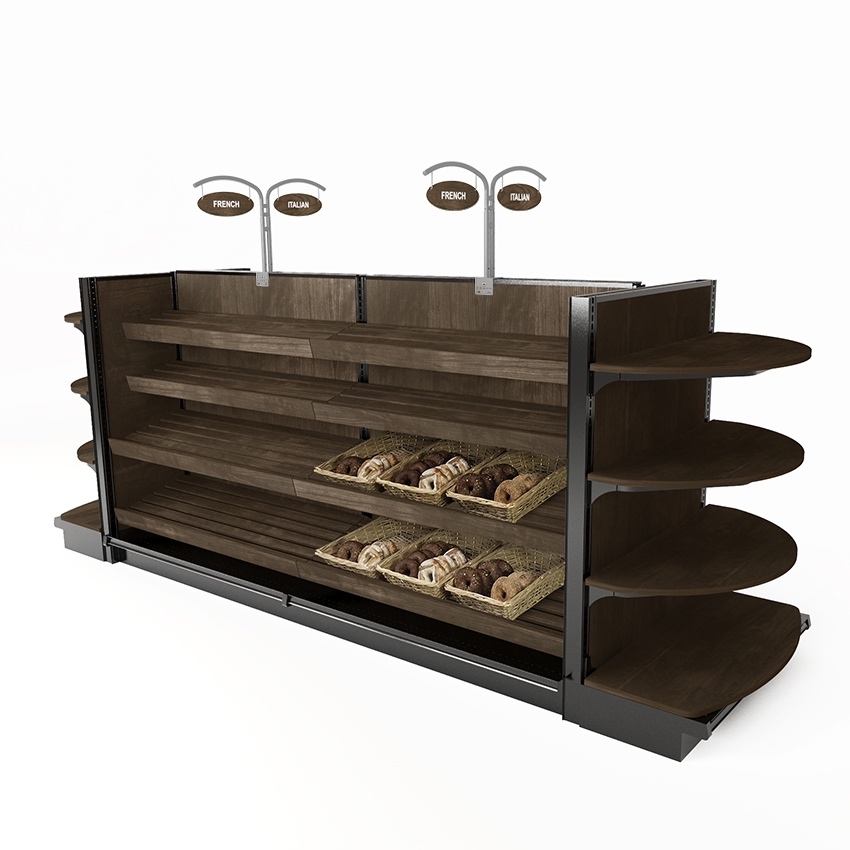 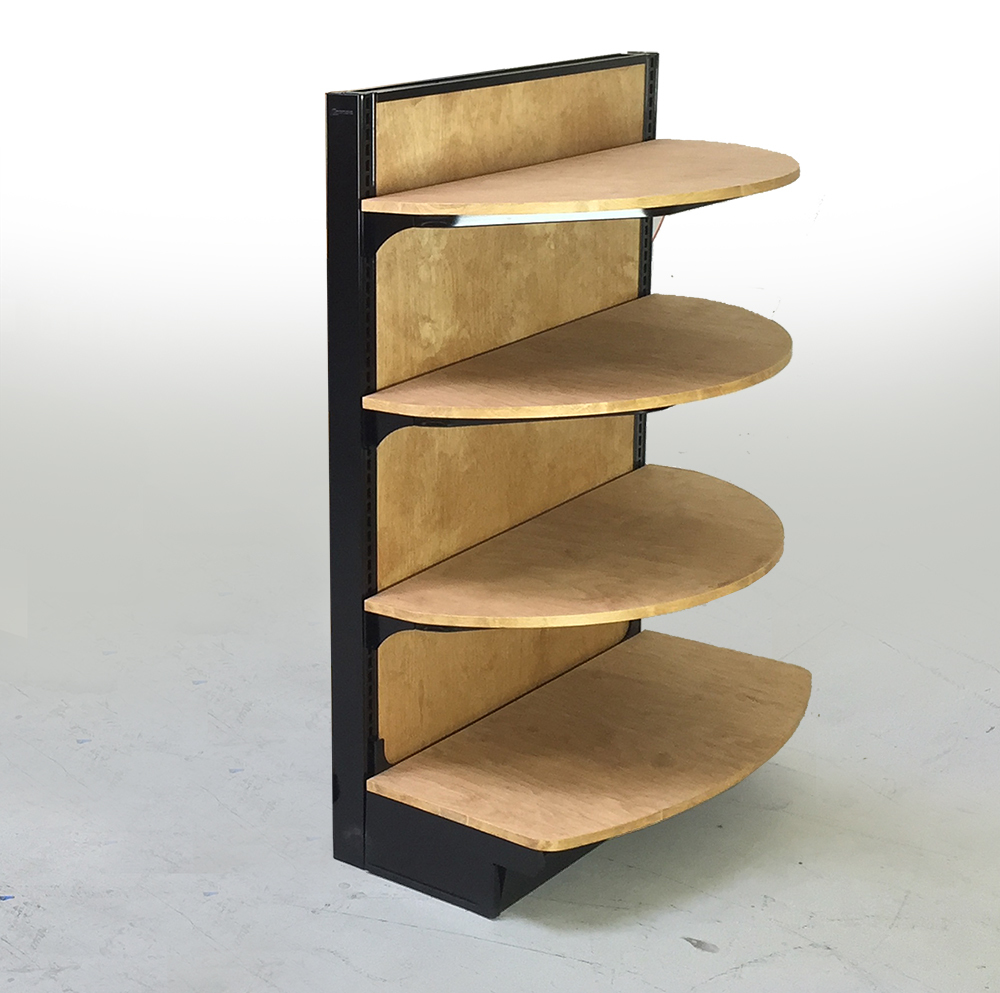